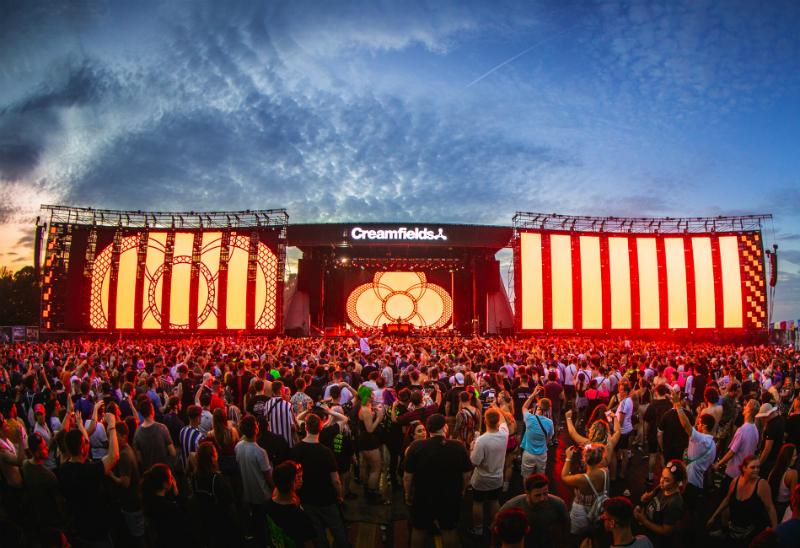 CreamfieldsUMEKUnited KingdomElectronicDance
20+ years in operation. 200+ of the world's biggest DJ superstars. 70,000+ visitors per day. The Creamfields festival is a massive undertaking by any measure, and all the more unique for it. Here's what it's like to do it in a day.

Heading to Creamfields, you get the feeling you're entering a different world. Maybe it's the long stretch of road you have to traverse near the northern British town of Daresbury to get to the site entrance, fenced off like a corridor to a strange land. But it's once you get through the security checkpoints that it truly feels like you've crossed over into a land apart.

It's hard to say what hits you first, the sights or the sounds. As the Creamfields Arena, the giant field that hosts the ten or so stages of one of the biggest electronic music festivals in the world, unfolds in front of you, packed to the brim with thousands upon thousands of ravers – more than 70,000 per day over four days, in fact – in an endless ocean of colour and bright lights, you're simultaneously bombarded by sound. Booming bass from the awe-inspiring Arc stage that hosts the biggest acts in the industry against an LCD backdrop the size of a toppled residential building clashes against slick razor-sharp beats escaping from a nearby tent stage, interspersed with chatter from thousands of excited mouths and random sound effects from the carnival rides scattered around the site for good measure.

It can be overwhelming at first, a cacophonous assault on the senses, but once the initial shock is over, you'll quickly get into the groove of things.

And there's plenty of groove to go around. Creamfields boasts one of the best lineups around as far as electronic music festivals go, with more than 200 acts rocking the decks over the extended four-day weekend. Whether you're here for the household superstars such as Fatboy Slim, Tiësto or deadmau5, the exclusive British show of Swedish House Mafia's comeback extravaganza, techno royalty such as Adam Beyer, Amelie Lens and Helena Hauff or up-and-comers such as Callie Reiff or Reklus, there's something for everyone here.

After wandering around the site and just taking it all in for a while, we end up at the Steel Yard stage, where Slovenian legend UMEK throws down a relentless beast of a set, one of the best of the entire festival according to many a punter. He’s still ruling the Beatport techno chart with his massive banger "Vibrancy", which grew in popularity and doubled its daily plays on SoundCloud and YouTube during the summer festival season, and experiencing a renaissance of sorts after taking a hiatus in previous years.

UMEK then hands the stage reins over to Berlin-based duo Pan-Pot, while we spend some time cruising between UK legends The Chemical Brothers and the night's undisputed headline show by affable Scotsman Calvin Harris, who showers the massive crowd with radio hit after radio hit and a boatload of pyro for added effect.

Then it's time to cruise around some more, taking advantage of the fact that Creamfields is probably one of the few places on Earth where you can grab a kebab on the way from Carl Cox to Pete Tong, and afterwards pop over to Chase & Status and Laidback Luke while your mate gets the drinks.

It's a unique experience and a whole different world indeed, and one can only hope for a longer expedition next year.

The Five Truths of British Festivals: You Just Can't Avoid Them

How much will Burning Man Cost You? Plus, the Ultimate Black Rock City Survival Guide As a music journalist and social media manager for musicians and such, Daniel spends most of his office hours listening to music and swiping on his phone. In his free time, he likes to relax by listening to music while swiping on his phone. It's a nice arrangement. Slovenia-born but currently located in London, he's discovering the secrets of this music mecca one metro ride at a time.